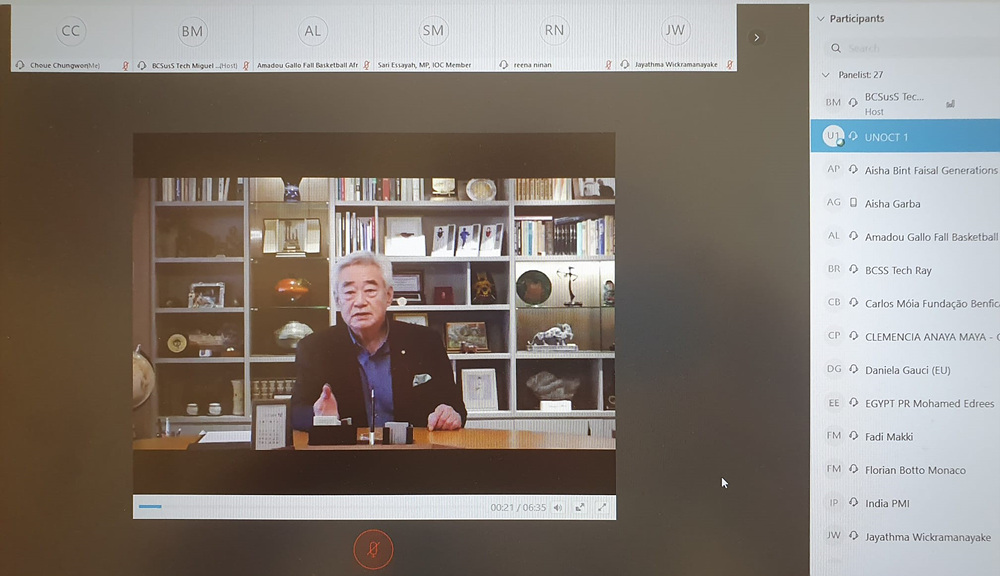 SEOUL, Korea (September 18, 2020) – World Taekwondo President Chungwon Choue was among the roster of distinguished and expert speakers who took part in the virtual high-level meeting on Sports Values for Preventing Violent Extremism on 18 September.

Organized by the United Nations Office of Counter-Terrorism (UNOCT), President Choue was speaking on a session entitled ‘Understanding contemporary forms of extremism and shaping international policies to tackle them through sport.’ He was joined by an array of notable speakers from the world of sport including world-famous football manager, José Mourinho, IOC Member Sari Essayah and former Dutch National Team footballer, Edgar Davids.

Speaking via video during the high-level meeting, President Choue spoke of the role that World Taekwondo and the Taekwondo Humanitarian Foundation (THF) have played in combating extremism and promoting peace through sport. From the Taekwondo Peace Corps, and Taekwondo Cares sport for development program, to the THF projects across Jordan, Turkey, Djibouti, Nepal and Rwanda, World Taekwondo has supported thousands of young people in need over the last decade.

“Peace is more precious than triumph is a motto; a way of living that was passed down from my late father, Dr. Youngseek Choue. Sport has a powerful role to play in creating a civilized society. As an Olympic sport, I am always thinking about how we can contribute to human society. Through Taekwondo, we promote values such as inclusiveness, respect, tolerance, courtesy, and integrity

“World Taekwondo is contributing greatly to the Sustainable Development Goals. Taekwondo was the first combat sport in the Olympic Games to allow the wearing of hijab in Beijing 2008. At the Rio 2016 Olympic Games, Taekwondo was the only sport to send equal number of male and female international referees. We also have Para-Taekwondo for people with disabilities to enjoy sport. Last year, World Taekwondo was one of the first International Sports Federations to sign the UN Sport for Climate Action framework, and we were recognized by the International Olympic Committee for taking concrete action to reduce greenhouse gas emissions in our World Championships.”

The virtual high-level meeting was organized by the UNOCT in partnership with the United Nations Alliance of Civilisations (UNAOC), the United Nations Interregional Crime and Justice Research Institute (UNICRI), and the International Centre for Sport Security (ICSS). It featured discussions between senior United Nations Officials, Member States and international organizations representatives, policymakers, and sports personalities committed to the fight against violent extremism.

The event was held to build on the 2030 Agenda for Sustainable Development and Security Council resolution 2419 (2018) on Youth, Peace and Security. The resolution recognized the “growing contribution of sport and culture to the realization of development and peace in the promotion of tolerance and respect as well as the contributions sport and culture make to the empowerment of youth and women, individuals and communities as well as to health, education and social inclusion objectives”.